Elephants across the world are under threat. Currently, there are 3 species of elephants, and each one faces its own unique set of challenges.

The three species are as follows, with the number of individuals remaining listed: 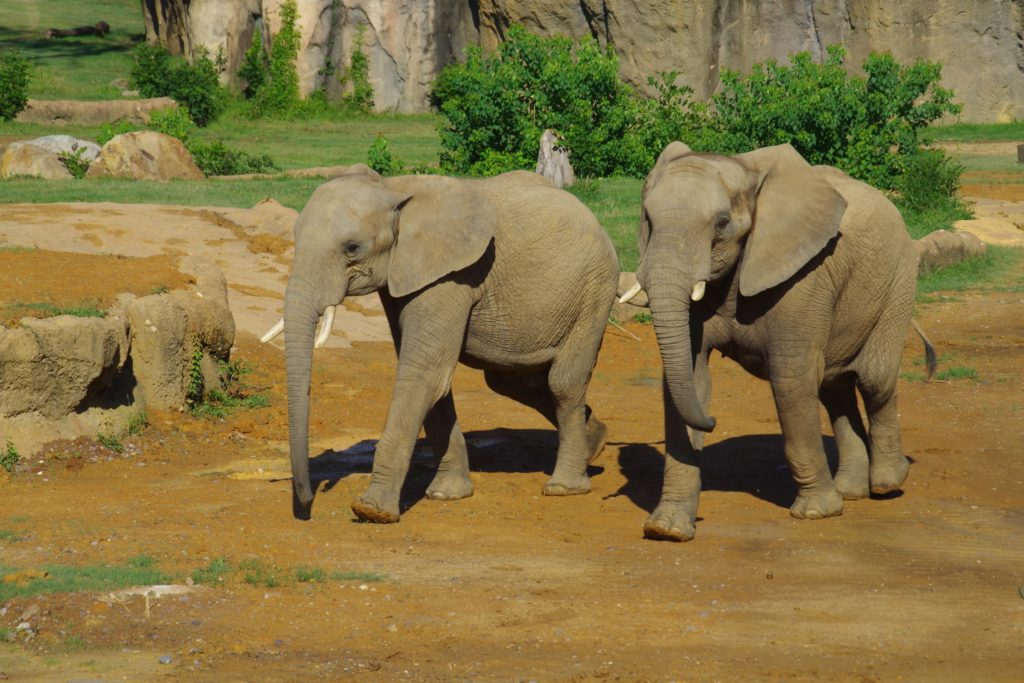 Elephants live in many different environments and are so widespread that the problems that face one population of elephants in South Africa are not the same problems that face a population of elephants in Tanzania. Even elephants in different parts of a single country face their own set of unique challenges that may not be the same as the other. There are some common widespread issues that all elephants face, but the solutions will be entirely dependent upon the specific region. It is important to take this targeted approach when talking about conservation of elephants, and to not take a blanket, one-policy-fits-all approach to try and address the issues.

Since your zoo is home to African Savannah Elephants, the rest of this page will be focused on the conservation of that particular species.

Elephants across the globe are threatened due to illegal poaching. Poaching is the illegal hunting or killing of an animal. Poaching of elephants can be for many reasons, whether for sport, to harvest body parts to sell on the black market, or even for illegal bush meat. However, the most common and widespread reason an elephant is poached is for their ivory tusks. Ivory is commonly used for jewelry and other forms of artwork across the world. In some places it serves as a status symbol in society. This results in ivory having a very high economic value. The highest demand comes from countries like China and Vietnam, but all across the globe people still buy ivory at an unsustainable scale. In a huge win for elephants, China banned the legal trade of ivory products starting in 2018. This has caused demand to drop, and in turn ivory isn’t as valuable, resulting in a decrease in poaching. At one point, it was estimated that 96 elephants a day, or roughly 30,000 a year, were killed for the illegal ivory trade. As that number drops, conservationists can turn towards the other problems elephants face.

Some areas experience much higher rates of poaching than others. Poaching is a complicated issue that has many causes, with economic and political instability typically being a key factor. Countries, and even regions within a country, that have little corruption and the ability to create organized anti-poaching units have seen tremendous success in dropping their poaching rates. Another extremely successful tactic has been providing locals with other economic opportunities. Poachers can often times be extremely poor farmers or villagers that feel they have no other option than to turn to poaching as a way to feed their families. Many organizations and governments have stepped in to provide other economic opportunities to deter locals from becoming poachers in the first place. Some poachers have even turned and become members of anti-poaching units, providing valuable information on poaching tactics to help protect the animals they once set out to kill.

What can you do to help stop poaching? The simplest answer is to not buy ivory when you see it, and to stay away from items that you think might be ivory. If nobody wants to buy ivory trinkets, then poachers do not have a reason to kill the elephants. It is a simple matter of supply and demand. Ivory can be tricky to spot, and sometimes traders trick you into believing it is something else. Always be cautious when you are travelling to ensure you are not buying ivory. If you feel uneasy about it, it is better to be cautious and pass on buying that item. 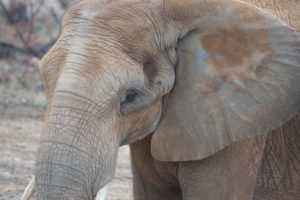 As the population of Africa skyrockets, elephants are finding themselves with fewer and fewer spaces to roam freely. All of the top 5 highest population growth rates in the world are projected to be in Africa. Africa will add hundreds of millions of people to its population by 2100. As the population surges, more people means more space for cities, farms, and other human industry. Unfortunately for elephants, this means less space for them.

Elephants can be migratory, sometimes roaming from region to region looking for the best opportunities for food and water. This allows them to evade droughts and ensure they can always leave an area when there is not enough to eat. It is also important to maintain genetic diversity across regions as animals come and go between groups. If the only safe space for elephants is inside the national parks themselves, we run the risk of turning each park or protected area into an island. It is critically important that we maintain corridors for elephants to migrate from park to park.

Your Birmingham Zoo has supported Dr. Charles Foley and his work in the Tarangire ecosystem in Northern Tanzania. Dr. Foley established the Tarangire Elephant Project, which works with local communities to protect those important wildlife migration corridors ensuring elephants in the region have more opportunities to migrate from place to place.

Throughout Africa, humans and elephants come into conflict on almost a daily basis. Elephants particularly love to raid local farms to eat all the delicious and highly nutritious crops. For farmers, an entire year’s harvest can be wiped out from a single herd of elephants in a single night. This is devastating for farmers, and not surprisingly leads to resentment and anger towards elephants. Farmers will then stand guard around the clock to try and protect their precious crops. It is their livelihood and only means of eating and providing for their family. When elephants come to eat the crops, the farmers sometimes try to scare them away, sometimes they will kill the elephants, and sometimes the startled elephants will kill the farmers. Too many human and elephant lives are lost each year due to this conflict.

Your Birmingham Zoo supports the International Elephant Foundation(IEF). IEF works towards mitigating human – elephant conflict across Africa to ensure that humans and elephants can live together peacefully moving into the future.

A key to elephant conservation, and wildlife conservation for that matter, is getting local communities to value the presence of elephants enough that they take measures to protect them. The easiest way to get a community to value anything is to show how it will benefit them economically. If a community stands to make money, then they are more likely to participate. Communities can be shown they stand to gain more economic freedom in the long term by protecting elephants. Ecotourism can boost a local economy tremendously, but the tourists will not come if there is little to no wildlife.

The Tarangire Elephant Project that your zoo supports takes action by supporting and implementing community based conservation. It works with communities to establish protected areas that are run by the communities themselves. Both the elephants and the communities benefit from this incredible project that is a model for programs around the world. 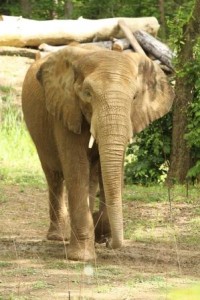 Another promising option to mitigate human-elephant conflict is the incorporation of beehive fences. For reasons not entirely known, elephants are afraid of bees. Organizations have taken advantage of this natural deterrent to created fences out of beehives to keep the elephants away, and they have been tremendously successful. Not only do these fences keep the elephants away, they are also a great source of income for local farmers through the harvesting and trade of the honey the bees produce. The bees in turn provide increased pollination as well, increasing the farmer’s yield, creating more income and providing more food.

Your Birmingham Zoo is the only facility in the country dedicated to housing an all-male herd of African elephants. This provides a unique opportunity to study their relationships and interactions to get a better understanding of African elephants in general. It can be tricky to study male elephants in the wild. They are extremely large, can have bad tempers, and don’t allow you to get up close to take accurate samples in real time. Thanks to the training our staff incorporates with our bachelor herd, we can study them properly in this setting. Weekly blood draws can provide data on how things on the inside of the elephant are changing that can then be matched up to the behavioral changes. Social situations can be switched up to study their interactions when the dynamics change. This research directly translates to a better understanding of elephants around the world, which increases our ability to care for them in their native ranges and here at the zoo. This information can even be shared to other facilities that helps them better understand and take care of their own bulls! Everything we do is to help get a better understanding of elephants, so that we can implement better techniques to provide the best care possible.

See exclusive footage of a space-age material being utilized to repair the tusk of the Birmingham Zoo’s beloved leader of the nation’s first all-male African Elephant herd!

The resulting collaboration produced an innovative procedure that is the first of it’s kind, as this short documentary illustrates.