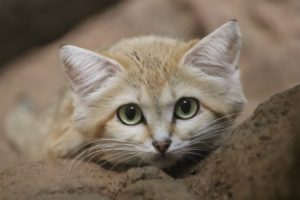 Sand cats live in three distinct regions of the world: Africa’s Sahara desert, throughout the Arabian peninsula; and in parts of central Asia.

Sand cats prefer a very dry, arid habitat with little vegetation, for which they are well adapted. They are sand-dwelling, inhabiting dry plains and rocky valleys where conditions are extreme. Surface temperatures can reach 124 degrees Fahrenheit during the daytime, then drop to as low as 31 degrees Fahrenheit at night. Sand cats have dense hair and pads on the soles of each foot that protect against the intense heat and cold of their habitat, as well as aiding in movement across the sand.

Sand cats are small, solitary cats that have pale sandy to grey-brown coat, which is slightly darker on the back and pale on the belly, with occasional stripes on the legs. Bold, red streaks runs across each cheek from the corner of both eyes. Sand cats have a broad head with large eyes and low-set ears and they have short limbs.

Sand cats have dense hair and pads on the soles of each foot that protect against the intense heat and cold of their habitat, as well as aiding in movement across the sand.

The current population of sand cats is 33 animals (19 males, 14 females) distributed among 12 AZA institutions and one private North American facility.

Sand cats eat primarily small rodents and will occasionally eat hares, birds, spiders, insects and reptiles. They are fearless snake hunters—their prey can include venomous vipers and other snakes. Sand cats are opportunistic feeders out of necessity. And like many desert-dwelling species, sand cats can survive for weeks at a time without drinking water. They will instead obtain any moisture they need from their prey.

Sand cats are mainly nocturnal (night) and crepuscular (dawn and dusk) cats, avoiding the intense heat of the desert by hiding in burrows. They rely on their ability to dig to create shelter from extreme weather.