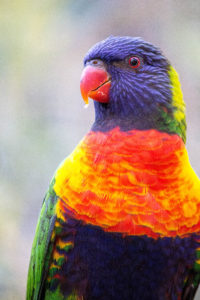 Worldwide there are over 50 species in the group of lories and lorikeets. Lorikeets have a very large range in the wild of over two million square miles. They can be found throughout southeastern Asia, Australia, and Oceania. Many species are found only in island habitats such as Polynesia, Papua New Guinea, and the Maluku islands.

Lorikeets are able to thrive in a variety of habitats, including lowland rainforests, open woodlands, and urban areas. Certain lorikeet species have become so common in agricultural and suburban areas of Australia that they are considered pests.

Lorikeets are small to medium-sized birds that grow between six to 15 inches in length. They tend to be slender, lightweight birds ranging from less than one ounce up to 10 ounces at most. The lorikeets tail tends to be long and pointed.

The average lifespan in the wild is around 12 years. In captivity, they can live to be around 20, with many living longer.

Lorikeets primarily feed on fruits and flowers – especially their nectar and pollen. Lorikeets are bottlebrush parrots, and have specialized brush tongues covered in fine hairs perfect for extracting nectar from flowers. They can feed from the flowers of about 5,000 species of plants across their incredibly large range. At the zoo, the lorikeets are given a daytime and nighttime diet. During the day in the MyEyeDr. Lorikeet Aviary, they are given a commercially available nectar mix, which contains flower nectar, bee pollen, soy protein, as well as a variety of vitamins and minerals. At night, the lorikeets are given a fruit and vegetable mix sprinkled with concentrated nectar powder.

Lorikeets have many courtship dances. Usually the male will follow the female, bobbing his head and whistling for her as his pupils dilate and contract. Once pairs are formed, they find a nesting spot. Most lorikeets are cavity nesters. In the wild they will nest in hollow spots in trees, and in captivity we provide them with a nesting box. You may also see the lorikeets digging in the mulch. Females lay one to two white eggs and will incubate for about a month. Both parents will help to feed and raise the chicks.

In an Australian aboriginal folktale, it is said the Rainbow Lorikeet (called a DetDet) gets its red chest from carrying a piece of kangaroo meat on his back, the juices from which dripped down onto the rest of his body. For the Gimi people of the Eastern Papua New Guinea Highlands, the Papuan Lorikeet (also called Red Lorikeet) plays a significant part in many of their songs and initiation rites. Red Lorikeet is the name for an adolescent male who has had his nose bled in a coming of age ceremony known as apina. Lorikeet-child is also the name for a family’s firstborn. In popular culture, the Rainbow and Australian Rainbow Lorikeet are seen as iconic Australian birds. Unfortunately it is common for lorikeets to be fed improper foods (such as bread and honey) by Australian residents to encourage the lorikeets to come to their backyards. This can make the birds sick from bacteria on improperly cleaned trays that humans set out, and causes many lorikeets deaths per year. The Office of Environment and Heritage of Australia discourages anyone from feeding wild lorikeets.

Lories and Lorikeets as a species have a wide range of conservation concerns due to the incredible diversity of this family of birds. Many species of lorikeets are threatened or endangered due to limited range and habitat loss.

The Birmingham Zoo has successfully bred lorikeets for many years. The Bird Department is home to the Avian Breeding Center (generously sponsored by MyEyeDr), which was established as a dedicated location for lorikeet breeding. This helps to keep our population stable.

The tips of their tongues have tufts of extremely fine hairs which collect nectar and pollen. Lorikeets have tapered wings and pointed tails that allow them to fly easily and display great agility. They also have strong feet and legs, which help them climb through the trees. Visitors may even see the zoo’s lorikeets hanging upside-down! Lorikeets tend to be be hyperactive and clownish in personality both in captivity and in the wild. They are playful and curious birds. Despite their great personalities, lorikeets do not make good pets. This is because they are very social, loud, and their projectile feces can be found five feet outside of even the largest cage.