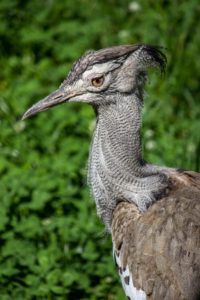 Dry grasslands, scrublands, and savannahs. The areas Kori Bustards are most often found in have short grasses and dry, sandy soil. They follow wild fires or herds of large mammals in order to pick their various foods out of the short grasses. They may also be found in areas used for agriculture, especially wheat fields with a few scattered trees. They are not found in densely forested areas because they need a lot of space to take off when flying.

The Kori Bustard is cryptically colored, meaning there are many blotches and spots all over its body. Its back and tail are a light brown, with large black and white spots near the front underside of their wings. The chin, throat and neck are whitish with thin, fine black lines. The feathers around the neck are loose and fluffy, giving the appearance of a thicker neck than they really have. It also has a black crest with moveable feathers that the males use for display. Its legs are long and scaled, with feet made for running that have three toes facing forward. The bill of the Kori Bustard is straight and pointed, and right above it are inquisitive brownish-yellow eyes.

Weighing in at up to 40 pounds, the male Kori Bustard is the heaviest animal capable of flight! Kori Bustards are sexually dimorphic, meaning there are obvious physical differences between males and females. The male Kori Bustard stands between two and four feet tall, with a wingspan of seven to nine feet.  Male birds typically weigh between 15 and 40 pounds, with their weight changing depending on the season.  They are heaviest during the breeding season.  Female Kori Bustards are about 30% smaller than their male counterparts, weighing an average of 11 to 13 pounds. Females stand about two feet tall with a wing span of seven feet.

The lifespan of Kori Bustards in the wild is currently unknown. In captivity, these birds have lived up to 27 years old.

In the wild, Kori Bustards have an omnivorous diet, meaning they eat both animal and plant material. Meat makes up the majority of their diet in the form of insects, small mammals, reptiles, and even other birds. They also eat seeds and berries, including the gum (hardened sap) of the Acacia tree.  At the zoo, our Koris have a morning diet made up of ground meat, fruits, vegetables, and a pellet food called Mazuri Softbill Diet. Their afternoon diet is mice.

The Kori Bustard breeding season is mid-March through August. During this time, the males will form a group known as a lek to perform for the females. The males will inflate their esophagus and appear to have a massive neck. They will then all display and make a low booming sound while females get to “window shop” and select a mate. These birds do not form pair bonds, and the females are solely responsible for egg incubation and chick rearing. They do not form a nest but instead create a small shallow scrape in the ground to place their eggs. Because the eggs are out in the open, they have brown splotches covering the shell to help them camouflage. The female will incubate the eggs for around 24 days, and when the chicks hatch they have feathers and are able to walk.

Kori Bustards have held various types of significance in numerous local cultures, as well as in Western culture. In their native range, Kori Bustards are historically hunted for food. The average weight of these birds is similar to a Thanksgiving turkey (15 pounds) and can easily feed large families. Being a food product does not necessarily mean they aren’t respected, however. In the /Gui-//Gana culture of Botswana, the male coming of age ceremony is named for the feathered crest of the Kori Bustard and the meat is reserved only for older members of the group. According to recent ethnographic studies, the Maasai people of Kenya and Tanzania are those who have the most Local Ecological Knowledge of the Kori Bustard and its habits, learned from their hunting practices. Some of the local names for the Kori are “Kgori” (Tswana) and “Gompou” or gum-eating bird (Afrikaans). In American culture, the Kori Bustard is valuable more in parts than as a whole, because its feathers are popular in the hobby of fly-fishing. See the Be the Change section for more information.

Near Threatened. One of the threats to Kori bustards are high-voltage power lines that pose a danger when they are in flight. They are threatened by two different types of hunting: local subsistence hunting for food, and hunting to provide feathers for the American fly fishing trade. Another threat is a common one for many animals – habitat loss.

Come see the Kori Bustards eat their afternoon meal and learn about Kori conservation at the Kori Kountry Feeding & Chat, which happens every day at 3:45 PM. The Birmingham Zoo aids in Kori Bustard conservation in many different ways. We have a very successful Kori Bustard program which includes breeding, hand-raising, and socializing chicks. Although we have not bred many chicks at the zoo, we lead the country in hand-raising techniques for Kori Bustards. We hand-raise chicks with the goal of creating future successful breeders, which means we have to limit human interaction. Chicks are not talked to or looked at too often, which reduces the chance of imprinting and increases future breeding success. Once the chicks are old enough, they are introduced to adult female Koris who help the chicks learn how to socialize.
Another way the Birmingham Zoo aids Kori conservation is through the Kori Bustard Feather Project. Kori feathers have long been valued in the hobby of fly fishing, which uses the feathers to create elaborate fishing lures. A single feather can be valued between two and five hundred dollars, with a bird being worth up to 10,000 dollars. To combat this, the American Association of Zoos and Aquariums partnered with a fly fisherman named John McClain to collect naturally shed feathers from Koris in zoos and offer them for free. This helps reduce the value of Kori Bustard feathers and make hunting them in their native range less profitable.
More information about Kori Bustard conservation can be found at the following links – www.koribustardssp.org/; www.feathersmc.com/kori-bustard-program/

Kori Kountry. This is currently labeled on the zoo map as the Aviary, which is located between Sea Lions and the Gator Swamp.

The Zoo has seven Kori Bustards, one of the largest populations in the country.  Some of the Kori Bustards are as old as 17, others only one year old (chicks that were hand raised in the summer of 2014).
The Zoo has four male Kori Bustards, and three are named according to the Zulu numbering system. This is the numbering system of the Zulu ethnic group located in South Africa. Their names are associated with colored bands on their legs. Red Band is Isishiyagalombili, Yellow Band is Isishiyagalolunye, and Blue Band is Isithupha. All three of the females have names, and their names are Isikhombisa, Prissy, and Ding.

Although the Kori Bustard is one of the heaviest animals capable of flight, they spend about 3/4ths of their time on the ground. They only fly when threatened.
Kori Bustards have many different vocalizations. During the mating season, the males will emit a large booming call. They are also able to bark, and sometimes they make a chortling coo sound. A symbiotic relationship has been observed between Kori bustards and Carmine bee-eaters, a small songbird.. The bee-eaters are known to ride on the backs of the foraging Kori bustard and eat the insects stirred up as the Kori walks. In return, the Kori may receive some form of predator detection service from the bee-eaters.