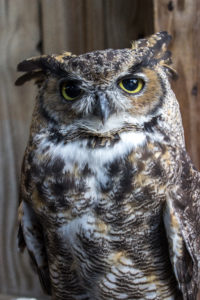 Most of North America and south into Central and South America

Found in most habitat types in North America. Swamps, deserts, forest, wetlands. Can be found in both urban and rural settings.

The Great Horned Owl is one of the most recognizable owls found in North America due to its large earl tufts that resemble horns. It is a highly camouflaged owl being mostly mottled brown with a large white patch on its throat. Color tone does vary regionally.

Weight: 3-5 pounds with females being larger than the males

The Great Horned Owl is a relatively early breeder when compared to other raptor species. Breeding normally takes place November to January. Females normally lay an average of 3 eggs. Incubation period for Great Horned Owls is around 30-37 days.

Aubry; age unknown. Aubry is a rescued bird from the Southeastern Raptor Center. Her specific age is unknown but she has been at the Zoo since 2013.

Owls have 14 vertebrae in their neck that allow them to turn their head 270 degrees right or left from the forward facing position.

The Great Horned Owl is the largest owl species that occurs in Alabama.

The Great Horned Owl has a very unique call. It is made up of soft hoots with a stuttering rhythm: hoo-h’HOO-hoo-hoo