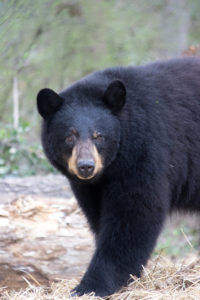 Found in Alaska, much of Canada and North America, and northern Mexico

Through much of their range, black bear habitat is described as relatively inaccessible terrain with thick understory and abundant food sources. Black bears are typically found in forest but can be found in mountains and swamps.

The name black bear can be misleading. Though they are typically black in color, their colors can range from brown, cinnamon, blue/grey, and even white.

Average 4-6 feet from nose to tail

Bears are omnivorous, meaning they consume both plant and animals matter. Only about 5% of a bears diet is made up of meat and most of that is scavenged and not hunted.

Mating season typically runs from June-July and bears reach maturity around 3-5 years of age. Females give birth to 2-3 cubs in January and February. Cubs are born blind and naked and remain in the den with their mother until spring. Females usually give birth every other year and the cubs will remain with the mother for 1.5-2 years.

American black bears are a prominent feature among America’s indigenous people and many Native America tribes. For example, The Navajo believed that the Big Black Bear was chief among the bears of the four directions surrounding Sun’s house, and would pray to it in order to be granted its protection during raids.

You can help American black bears by being a good neighbor. Help bears by storing pet food inside, leaving your trash inside and covered until day of pick up, clean up you BBQ grill, and be respectful of bears space.

Bety and Sassy, both females

Bety and Sassy are wild rescued bears from Big Sky, Montana. They were being fed by humans and lost their natural fear of people. Three attempts were made by Montana Fish and Wildlife to rehab the bears and release them back into the wild, but were ultimately unsuccessful and the bears were deemed nuisance and non-releasable.