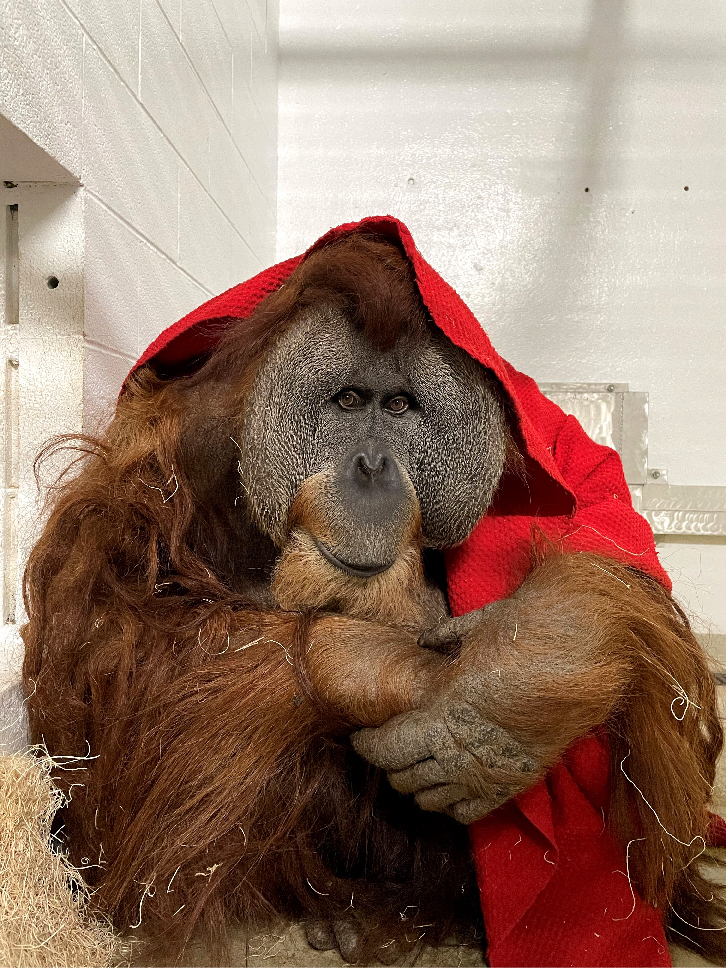 After Birmingham Zoo Animal Care Professionals noticed Oliver had a swelling between his legs, Zoo veterinary staff immediately conducted an awake ultrasound of the swelling during a training session. The ultrasound revealed the mass to be solid and the veterinary team became concerned that it was a testicular tumor. According to Dr. Stephanie McCain, Birmingham Zoo Director of Animal Health, DVM, Dipl, ACZM,”As we reported in 2015, Oliver also has heart disease, which is the most common ailment in older apes, increasing his risk for anesthesia.”

“We contacted Veterinary Specialists of Birmingham, who sent two surgeons, Dr. Paul Vaughn and Dr. David Dismukes, to remove the mass so our veterinary team could focus on the anesthesia,” said Dr. McCain. “The procedure went very well and the mass was found to be a typically benign testicular tumor called a seminoma. Oliver is well on his way to a full recovery.”

Oliver came to Birmingham Zoo in 1987and he is the second oldest male Sumatran orangutan in an accredited North American zoo, the current oldest being 42 years old. He lives with Lipz, the Zoo’s resident adult female, and Nairi, their 10-year-old daughter.

Orangutans are the only great apes native to the rainforests of Indonesia and Malaysia. They are currently found only in parts of Borneo and Sumatra, but originally they ranged throughout Southeast Asia and southern China. Now critically endangered, the destruction and degradation of the tropical rain forest for palm oil and timber is the main reason orangutans are threatened with extinction.

The Birmingham Zoo is committed to the highest standards of care for all its animals. We are proud of the dedication and commitment of Zoo Staff and outside experts towards animal care, and thank the community for their continued support of the Birmingham Zoo.