The Birmingham Zoo is mourning the passing of two of our animals, Matt, a 14-year-old male Komodo dragon, and Tadpole, a 41-year-old male Nile hippopotamus.

Matt Komodo dragon showed sudden onset of hind limb weakness and despite extensive diagnostics, including a CT scan, and supportive medical care, his condition worsened, and he was euthanized on Thursday, June 18. A necropsy (post-mortem exam) showed Matt to be in heart failure. This is not common in reptiles and our veterinary team is awaiting additional testing to try and determine an underlying cause. 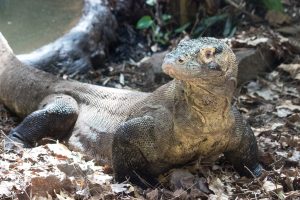 Tadpole hippopotamus was being closely monitored by the Zoo’s veterinary and Animal Care staff for increasing kidney values, which is common in geriatric animals. Diagnostics, such as X-rays, are limited in such a large animal. As his kidney values continued to increase and he stopped eating, the difficult decision was made to euthanize him on Friday, June 19, 2020. On his necropsy exam a large number of bladder stones were identified.

Both animals received excellent and vital care as members of the Zoo’s animal family. “Matt and Tadpole’s additional test results are pending,” says Birmingham Zoo Director of Animal Health, Dr. Stephanie McCain, DVM, Dipl ACZM. “The decline in health and passing of Matt and Tadpole is very heartbreaking. Both animals were favorites of many—they will be greatly missed by all of us.” 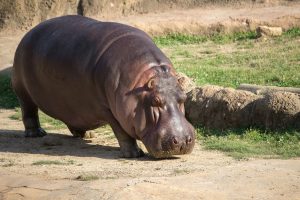 “The passing of Matt Komodo dragon and Tadpole hippo is a devastating loss for not only our staff and volunteers but also for our guests who loved them,” says Birmingham Zoo President & CEO, Chris Pfefferkorn. “Both animals were beloved longtime members of our Zoo family and always received the best care and attention from our Animal Care staff. Matt and Tadpole hold a special place in our hearts, and they will be deeply missed.” We are thankful to our extended Zoo family and the community for your continued support during this time.

About Matt Komodo dragon Matt was born on August 8, 2007 at the San Antonio Zoo. He came to the Birmingham Zoo on September 17, 2009 and resided in his habitat in the Reptile building. Matt was known to be smart and inquisitive, mastering crate training in just three sessions. He was quite adept at participating in husbandry training and readily learning new behaviors that greatly assisted with his care. Matt was also known by the Animal Care Professionals who cared for him to be mischievous and funny, and he enjoyed relaxing in his pool, sometimes dipping his head under the water, and blowing bubbles.

About Tadpole Nile hippopotamus Tadpole was born on October 22, 1978, at the Houston Zoo. He came to the Birmingham Zoo on June 16, 1979 and resided in his indoor and outdoor habitat (both equipped with pools) in Trails of Africa. Tadpole was one of the oldest living Nile hippopotamus at an Association of Zoos and Aquariums (AZA) accredited zoo. He was known to enjoy sleeping in his pool during the day, playing in the hose, and eating his favorite foods of apples and bananas. He was fondly described by his caretakers as “sassy.”