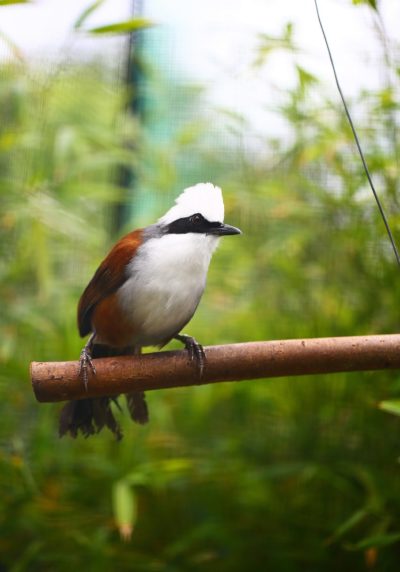 The Birmingham Zoo is asking for help from the community in finding two (2) white-crested laughingthrush birds that went missing from their habitat overnight, on Thursday, September 12.

Both birds were discovered missing early morning on Friday, September 13, while Animal Care Professionals were conducting their routine animal wellness checks and feedings. Zoo staff implemented standard operating and safety procedures to ensure that other animals were safe and quickly secured the area. A full inspection of the white-crested laughingthrush habitat revealed the enclosure mesh had been cut, with a large portion removed.

The exact time of the incident has yet to be determined. The Birmingham Zoo utilizes a variety of security measures to ensure the safety and welfare of the animals at the Zoo.

The Birmingham Zoo’s perimeter fence is intact and no other areas of the Zoo or animal habitats were compromised. The disappearance of the white-crested laughingthrush pair remains a singular incident and it was the only animal habitat vandalized. It is not known if the birds were taken or flew off once their habitat containment was compromised.

Birmingham Zoo administrators have filed a police report and are fully cooperating with Birmingham Police and authorities to help in this ongoing investigation.

The Zoo is asking the surrounding community to be on the lookout for the birds. If you see the missing birds or have any information on their whereabouts, please call the Birmingham Zoo at 205.879.0409 so that Zoo Animal Care Professionals can respond.