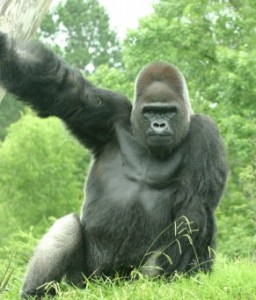 Babec, the Birmingham Zoo’s male, 28-year-old Western Lowland Gorilla, died April 11, 2008. Babec was diagnosed with heart disease in March 2003 and received the world’s first successful cardiac resynchronization therapy device, or CRT, in 2004. His procedure was documented nationally in the Washington Post and USA Today. In his last few weeks, Babec’s cardiac disease progressed. Based on this, the Birmingham Zoo animal care staff made the difficult decision to humanely euthanize Babec.

As seen in the Winter 2005 issue of Animals Tracks, the Magazine for Members of the Birmingham Zoo.

On September 25th, 2004, the Birmingham Zoo successfully implanted the first cardiac resynchronization therapy device, or CRT, in a gorilla. One year later Babec is still alive, an unlikely scenario without the device, and his quality of life is significantly improved from that prior to surgery. 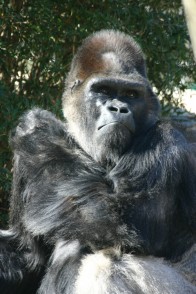 Lowland gorilla, pressing his hand to his chest and upper abdomen as if he were in pain. He had developed a cough, lethargy, and loss of appetite. His fluids were increased, he was given antacids and antibiotics, but his symptoms continued. A complete physical examination was then planned, a tall order when the patient is a 400 pound gorilla.

Thus began a partnership involving the Birmingham Zoo, the best in human cardiology and veterinary medicine in the region, supported by the top medical equipment manufacturers in the world.

That March the Birmingham Zoo’s Director of Veterinary Services, Dr. E. Marie Rush, enlisted Dr. Navin Nanda, Professor of Medicine and Director of Echocardiography at the University of Alabama at Birmingham (UAB). Supported by equipment and staff from Philips Medical Systems, this team of specialists determined that Babec suffered from severe cardiac disease.

In the months following the diagnosis Babec responded well to therapy aimed at increasing his overall cardiac function, showing few outward signs of his disease until the summer of 2004. His treatment included many of the same medications human patients take for cardiac disease, including diuretics. And, to replace the electrolytes washed away by the diuretics, Dr. Rush wrote an additional prescription for Powerade, something Babec likes and would drink readily. Birmingham Coca-Cola Bottling Company has gladly donated all of the Powerade Babec has needed since then. 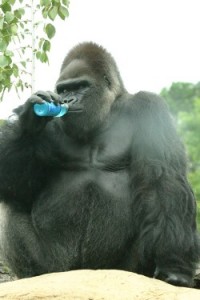 Babec’s second cardiac evaluation revealed no significant change, but the third evaluation in July 2004 showed a progression in the severity of his disease. Though adjustments were made to his medications, his appetite declined, he became lethargic and he had lost 80 pounds (20 percent of his bodyweight), all symptoms of congestive heart failure. It was apparent that his disease had progressed into class four heart failure – the final stage of congestive heart failure.

Babec’s medical team decided to immobilize him on September 25, 2004, for extensive tests to determine if his quality of life could be improved with more aggressive treatment. The Zoo’s Dr. Rush assembled the UAB and Auburn University experts in human and veterinary cardiology once again. This team included Dr. Neal Kay, Professor of Cardiology at UAB. Dr. Kay and the team thought Babec might benefit from a treatment never before attempted in a gorilla. Diagnostics confirmed that his disease parameters fell within the appropriate criteria for a common human therapy for this type of cardiac disease, implantation of a cardiac resynchronization therapy device, or CRT. The surgery was extremely critical and the Zoo staff faced a hard reality – they would lose Babec on that day if the CRT did not work.

That day the medical team initiated surgical implantation of a RENEWAL 3 CRT system, donated by Guidant Corporation, and their representatives participated in the procedure. The procedure was based on the human model. A portable fluoroscopy unit, which shows real time radiograph images of the heart and major vessels, imaged his anatomy during surgery. This equipment, as well as the echocardiograph machine, was donated for use in this procedure, transported and operated by Philips Medical Systems, and their representatives. Emotions ran high as Dr. Kay placed the last lead into Babec’s heart. Tears of joy and shouts of relief were heard all over the clinic at the success of the procedure.

Primates are difficult to handle post-operatively, due to their intelligence and ability to manipulate incision sites with their hands and feet. Changes were made to Babec’s habitat to prevent activities that could compromise the placement of the device or the surgical incision. Various methods were used to distract him from picking at the incision site, such as chewing gum in his hair and ‘decoy’ sutures placed away from the site to provide alternative areas to manipulate. Patches of hair were shaved to resemble the incision, and his fingernails were trimmed and smoothed. His fingernails were even painted with nail polish to distract him.

Babec returned to his habitat several weeks following surgery. Although the procedure has improved his quality of life and extended his life another year, it does not repair his heart disease. His disease is progressive and incurable. Even though the CRT device does not reverse existing damage, it has helped his heart work more efficiently, increasing his energy, appetite and activity. Most important is the improvement in the quality of Babec’s life, which was the goal of his implant.

Six months after the procedure, Babec and his exhibit companion, another Western Lowland gorilla named Jamie, tussled, as is normal behavior for two males of this species, and Babec’s CRT device was damaged. This became evident when his old symptoms returned. Babec was again immobilized and a new device was implanted. It was not long before his condition improved.