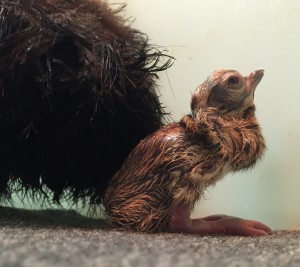 mingham Zoo’s Bird Department is happy to announce another successful hatch of a kori bustard chick. This year, the Bird Department hatched two chicks, both of which are doing well. These chicks were hatched from eggs that the Birmingham Zoo received from the Jacksonville Zoo in Florida. The two chicks being raised this year will bring the total up to over 10 kori bustard chicks over the past four years. The Bird Department also specializes in a hand-rearing technique, which prioritizes natural behaviors and reduces imprinting. The kori bustards the Zoo raises should go on to be successful breeders and parents in the future. This will help reduce the amount of hand-rearing needed and increase the captive population of kori bustards overall. You can view the Zoo’s adult collection of kori bustards, one of the largest in the country, at the Aviary. 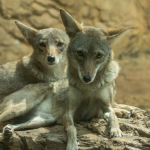 The Birmingham Zoo is excited to announce the newest members of the Zoo family, Yuma and Kaya, rescued coyote siblings! They are now on exhibit in their temporary home in the Predator Building. Yuma and Kaya, brother and sister, have been exploring their new habitat. When they aren’t hunting for bugs and lizards in the grasses of their yard, they can be seen resting up on the rocks by the inside visitor windows. On sunny days you may see Yuma and Kaya wading through their pool and interacting with different enrichment like floating boomer balls and sinking tubes. We hope you will visit Yuma and Kaya in their temporary exhibit on your next Zoo visit! 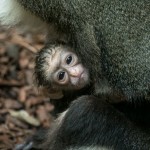 The Birmingham Zoo is proud to announce the birth of its newest family member.  Around 11:35 AM (CST) on July 27, 2015, a De Brazza’s monkey was born. This is the second offspring for both fifteen-year-old mother, Brittany, and eight-year-old father, Huey. It is the most recent De Brazza’s birth since Poppy, their first offspring, was born at the Birmingham Zoo on Memorial Day in 2014. The new arrival is nursing and is in the process of bonding with its mother.

The Birmingham Zoo is a member of the American Association of Zoos and Aquariums and has joined with Aquariums and Zoos in North America maintaining Species Survival Plans ® (SSP). An SSP is a cooperative breeding and conservation program. The Birmingham Zoo currently participates in 103 SSPs, and is an active member of the De Brazza’s monkey SSP.  With this pregnancy, the Zoo’s veterinary staff were able to get an ultrasound and prenatal measurements, which will contribute to our understanding of De Brazza’s monkey fetal development. With this breeding effort, the Zoo continues its mission of “Inspiring Passion for the Natural World…through emphasizing Conservation, Education, Scientific Study and Recreation in all aspects of the Birmingham Zoo’s exhibits, programs, facilities and activities.”